Whether you’re furnishing a single room or the whole house, a cottage or a castle, the challenge before you is the same. You know you have to get it right, otherwise you’ll be stuck with a monstrosity of a home for the better part of your life, or at least until the next pay raise. Therefore, simply following your gut instinct and buying furniture just because it seems nice to you, is out of question. In fact, interior design has evolved into its own science and following the principles of successfully established styles can help you achieve a look that’s both functional and tasteful.

If you were already looking for design inspiration and stylish themes, you probably have come across two names – Scandinavian and shabby chic. Both being popular modern styles, the two share some similar principles but are widely different concerning their predominant aspects. Now, take a quick look at the most important characteristics of each style and see whether it appeals to your personal tastes. 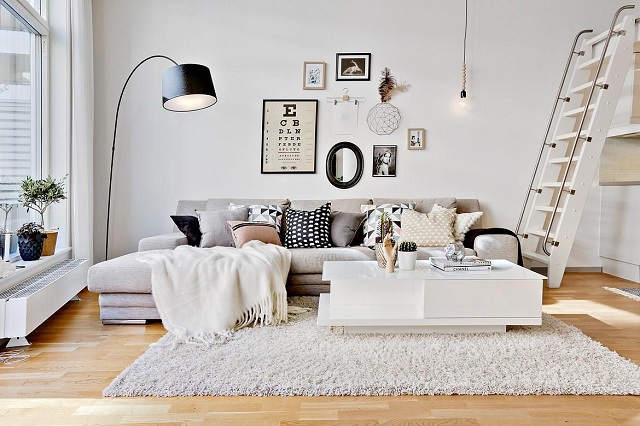 If you’ve been paying attention to interior design trends, you probably noticed that Scandinavian style is having a moment. And it’s no wonder why! This popular style is no fuzz, fresh, cheerful and entirely achievable within the limits of every budget. Originating from the cold Scandinavian countries, modern Scandinavian furniture aims to bring warm cosiness to the home. The way it does this is by featuring gentle contours and soft, natural materials that invite you to sit down and enjoy the moment. With Scandinavian, pillows are never too much – feel free to cosy up the sofa with some plush pillows in different fun patterns.

The reason why this style is a favourite among modern homeowners might also have something to do with its focus on functionality and minimalism. Scandinavian design often employs simple but smart multi-purpose furniture pieces that help take clutter away. All of this is packed in a crisp clean aesthetics of mostly white, accented by soft pastel hues. Actually, the ultimate motto of this style could be phrased as Less mess = less stress.

Although simple, Scandinavian design is everything but ordinary. It takes modern design to a whole new level with décor elements in fluid lines that have a bit of futuristic charm in them. And while you might normally associate it with IKEA, modern Scandinavian furniture comes in a variety of unique looks from many notable designer names such as Muuto, Zakia, Menu, to name a few. When in doubt – go Scandinavian, the beauty in it is that it will always look up-to-date.

On the completely opposite end of the spectrum lies shabby chic, a modern interior style inspired by charming old-timey pieces. And don’t let the name fool you, there’s nothing shabby about it. Even though the furniture seems neglected and randomly plunked down, this style is achieved with careful consideration and painstaking attention to details.

Shabby chic aims to blend the old and the new into a charming whole. Similarly to Scandinavian style, this furniture also soaks up lots of white and features mostly natural woods. However, the difference between the two is huge. While Scandinavian loves clean-cut lines and sleek looks, shabby chic aims to look as worn out as possible. Shabby chic furniture pieces commonly have deliberate dents and scratches to make them look as if they were recycled or handed down from a grandparent.

The additional elements of this style can be old and discarded things that have been re-purposed. For instance, tin cans and jars in the role of candle holders and vases, cushions made from old handbags, ash trays that were once exquisite jewellery boxes and vintage dinner services. Shabby chic is another style that’s affordable for every budget because it gives you the freedom to use old items and try some DIY projects.