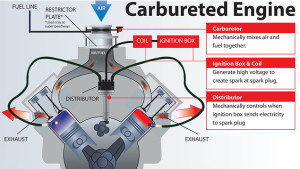 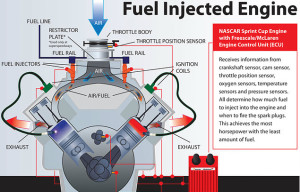 There is an ongoing debate among car ‘freaks’ on which engine holds most power and has the most fuel efficient characteristics. This debate raises another question which is also very popular: Carburetor or Fuel injection system? One big difference is that carburetor is only meant for gasoline engines, unlike diesel fuel injection. In addition, both these car parts have the purpose of mixing air with gas in order to create pressure that runs the engine. Based on a strength and efficiency, both parts have their ups and downs. Here we will try to give the best perspective for both of them.

The Carburetor was just a design in 1876, created by Luigi De Cristoforis and was presented as part of the first petrol combustion engine in 1882 by Enrico Bernardi. Basically, the carburetor has a simple design with a venturi tube that contains small jets that push the gas into the combustion area to create pressure. A large valve is regulated in order to allow for an optimal amount of air to enter and mix with the petrol. Compared to the fuel injection service, carburetors don’t allow detailed air-petrol ratio measurement in the combustion chamber. However, unlike gasoline or diesel fuel injection, carburetors are simpler to install and last longer. That’s why race car engineers prefer carburetors over fuel injection service.

Gasoline or diesel fuel injection has become the primary system for pumping fuel into internal combustion engine that has slowly replaced carburetors in the 80’s and 90’s. After series of different fuel injection systems tested in these decades, the fuel injection service that we know today has proven to be the best. Compared to carburetors, fuel injection systems do not rely on suction by intake air in order to mix the fuel. Actually, this system atomizes the fuel by pumping it out through small injector nozzles. That’s why regular engine checks must focus on gasoline or diesel injector service so that the car does not lose power or more fuel than usual.

Depending on how you see your car and what you use it for, the decision between a carburetor orfuel injection service is a tricky one. Based on the fact that cars these days are more a necessity, it is right to say that fuel injection engines are more fuel efficient, thus making them the first choice when buying a car. On the other hand, we’ve said that carburetors can last longer and provide more power in cars. For someone that loves a good drive on the highway this may be the real choice.