Boat engine is one of major and the single most expensive piece of marine equipment. Choosing an engine for your boat can be quite a challenging task, especially if you are not familiar with available options. There are three types of boat engines: 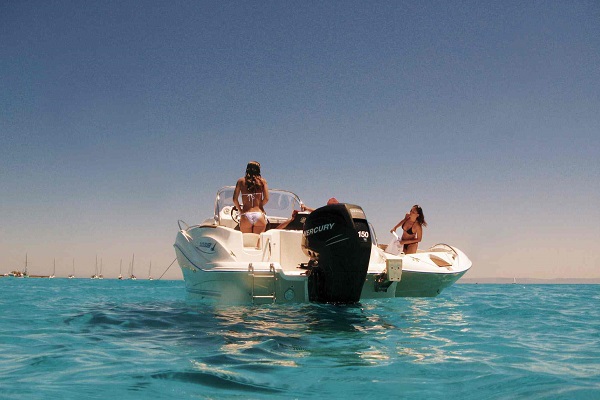 While outboard engines are used for general purposes and offer advantages in maintenance and ease of control, inboard engines are ideal for water skiing applications and provide better stability. Inboard/outboard engines are very similar to inboards, with one major difference in the transmission system. Read on to learn the differences between the three types of boat engines to help you decide which ones fits your needs best.

Outboard boat engine is the obvious choice for fishermen who spend a lot of time on water and owners of light commercial inshore boats. These engines are easily accessible, as they are mounted out of the boat, high up on the transom. Most outboard motors are lightweight and less expensive than inboard and inboard/outboard engines. When not in use, this boat engine is easy to remove from a boat. The main disadvantage of outboard boat engines is the lack of power if compared to inboard/outboard boat motors. Also, boats using these engines have less room at the rear.

As is the case with other marine equipments, these three boat engines differ in many terms. Inboard engines last a lot longer than outboard engines, without any performance losses. These engines are less common in smaller fishing boats, because they require a large box positioned in the middle of the boat; are more expensive and more difficult to load on a trailer for transportation. Inboard boat engines are also known as being more versatile than outboard engines, since they can also be used in cars. This means that they have more horsepower, more torque, better mileage and quieter operation.

The gear of inboard boat engine is located inside the boat, while on inboard/outboard engine, the gear is known as a stern drive unit and is mounted to the transom on the outside of the boat. The stern drive unit is also known as an out drive unit, which is always submerged in water. These engines are mostly used by slalom skiers, because they have a low center of gravity and produce only a little wake.

The main advantage of inboard engines over i/o and outboard boat engines is that they are installed inside the boat, so an extended life is expected. Outboard and I/O motors are submerged all the time, which has a significant impact on engines’ life.