From all alcoholic beverages consumed worldwide today, in most countries wine and beer seem to be the most popular ones. Being ranked the highest, wine and beer are in direct competition in the alcohol business field and that is why so many new brands arise every year. It is hard to say exactly whether wine sales exceed beer sales or if it’s the other way around, but if beer had a significant advantage in the past, these days this is not the case. Moreover, this situation is influenced by other less popular alcoholic beverages like whiskey, cognac, vodka and other liquors. This competition that has occurred recently is largely identified by great advertising campaigns that are meant for multinational markets. Beer and wine manufacturers are taking extreme measures in advertising, recruiting famous sportsmen and actors to promote their products in order to stay on top of their game. Some have shown great success, while others have failed and lost millions of dollars.

Beer advertising has created a lot of accepted commercials that keep loyal customers satisfied and manage to attract some new ones at the same time. Most of these adds put male customers in focus and try to trigger their thirst for a cold bottle of beer. This is no wonder if we brainstorm the relation between men and beer. It is, in fact a ”manly” drink. If you haven’t noticed, beer commercial are mostly aired during sport games and similar events. So don’t get all naive and think that this is a coincidence. Highly skilled market researchers have identified that almost all men who watch sports (there’s a small number that doesn’t) like to have few beers with their friends during the game and thus have created a strategy to expose their products for these potential customers. 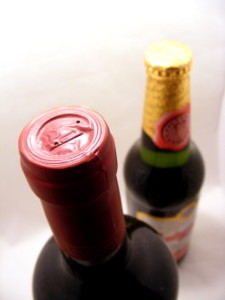 A good example of successful beer advertising strategy is the one that Heineken has conducted using the popular Champions league to promote it’s product. This campaign was so successful that Heineken became a synonym for a Champions League match in Europe.

Wine advertising has also been quite successful but compared to beer it hasn’t really enjoyed the same exposure on TV and other large media channels. One different advantage that wine companies have is that their market is described as more loyal. This means that wine lovers usually stick to the taste they like and avoid replacing it with different brands and sorts. Having said this, we may easily confirm that with a good targeting strategy wine manufacturers can obtain a solid loyal customer base.

In the same manner in which beer is considered a male drink, wine is a woman’s preferred alcohol. Consequently, as men like to have a beer after a hard day at work, women like to relax with a glass of good wine. Small details like these can be the turning point in a successful marketing campaign that will increase wine sales.