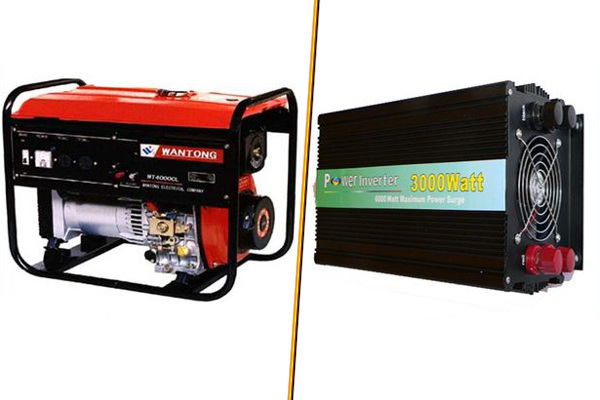 Fuel Efficiency And Run Time – The conventional generators are usually designed to provide certain amount of power where it is needed and to maintain the power. The generators can accommodate bigger fuel tanks, meaning that they have relatively long run times. But this electrical power equipment can pollute the environment for a relatively small benefit. For example, if you are using a 7kW generator for 700W surround system, you are wasting huge amount of fuel for a little benefit. On the other hand, the inverters are designed to accommodate relatively small fuel tanks. The result of this is a limited fuel capacity and shorter run times. But the inverters can make better use of the fuel and the savings can be up to 40%. They have fuel efficient engines that have capability to adjust the speed, depending on the application.

Noise – The noise is certainly the issue that truly separates these useful electrical tools. The inverters are silent when compared to the generators. Sound dampening technology is used in inverters to reduce the noise to surprisingly low levels. They can adjust the characteristics of the power which is provided by using microprocessors and special electronics. This way the engine saves fuel while at the same time reduces noise. The conventional generators on the other hand, operate at constant speed and with constant noise, which is louder when compared with the noise generated from the inverters.

Power Output – The conventional generators can be found in different sizes wit capacity ranging from 500 watts to 50 000 watts. The inverters on the other hand, have limited capacity which is usually in the range of 1000 to 4000 watts.

Quality Of The Power Provided – The power provided by the inverters is cleaner and with higher quality when compared with the power that is provided by the generators. Today many electronic devices like TV’s, game consoles, phones and many other use different kinds of microprocessors which are very sensitive to the quality of the power they use. Using power with low quality can cause a malfunction. Therefore, inverter is the recommended piece of electrical equipment for such devices.

Parallel Operation – Some inverters can be paired with another identical devices to double the power capacity. This option means that instead of using one big and bulky generator, two smaller and lighter inverters can be used. Conventional generators don’t offer this option.

In the end, the type of the system or application for which these electrical tools are going to be used, determines which one is most suitable.