Though in the past people had to rely only on themselves to fix problems, nowadays we have plenty of tools and devices for the job, all it takes is having the right ones. This means, unlike centuries and decades ago when people had to experience going on days and days before a problem could be fixed, now we can even detect it long before it gets so serious it would take more work to handle it. This doesn’t only save us money, but precious time as well, which is especially crucial when it comes to businesses. Such tools that we rely on both for home and commercial use are infrared cameras and infrared thermometers, but which one gives better diagnosing results?

Thermal cameras, such as the FLIR TG 165, are sophisticated devices created to transform thermal energy into light and it’s the thermal sensitivity feature that detects the smallest temperature difference, both hot and cold. This is captured in an image which is then processed and shown on the screen. With latest technology, you can download the image quickly either through a USB or a micro SD card, something that’s of utmost importance for diagnostics who need to have that specific reading thoroughly analysed so they can provide a better, more detailed report. Though designed for army purposes, thermal imaging cameras gained popularity immediately because of their widespread usefulness. 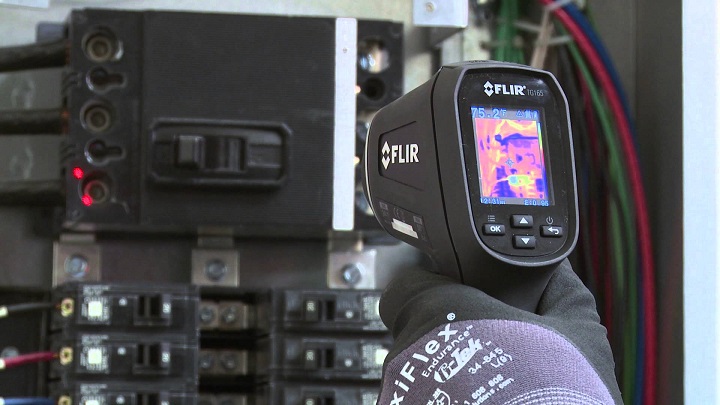 Law enforcement finds use of them for surveillance, firefighters use them in rescue operations, construction technicians and home inspectors find them most helpful with detecting heat loss, as well as electrical issues when something’s wrong with the circuits that’s not visible for the human eye. The name FLIR is actually an acronym derived from “forward looking infrared radiometer” meaning this sort of test device can read heat radiation same way we’re used to photography cameras detecting light. The reason a camera such as the FLIR TG 165 is the sort of must-have tool is that it can significantly ameliorate safety in specific working and living environments.

Unlike infrared cameras, infrared thermometers are relatively inexpensive but they lack the precision. IR thermometers are only designed to provide one spot measurement at a time instead of the thousand temperature measurements in an image as the IR cameras do, and they aren’t that good at giving accurate results when reading is done at a greater distance, something that can be fatal during electrical problem diagnosing. It’s not all about the price if you can reap the benefits in the long run; why just get a reading in numbers when you can see a whole image.